What was your favourite play place as a child?  What made it so enjoyable?  My kids found a playground they loved a short walk from our hotel on our recent trip to Orlando.  What made it so much fun?  Well, it was broken!

The playground had an elevated platform with a raised stepping stone part where each step was secured to both a bar above and a small chain link connection into the ground, allowing the stepping stone to move just slightly.  The movement of the stepping stones was so slight, that it did not provide much a challenge for kids beyond the age of 3 yrs.  However, much to my son’s delight, the first stepping stone was missing and the challenge was perfect! 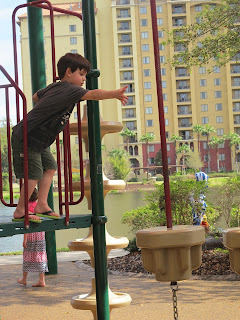 Upon arriving at the park, my son felt uncomfortable with the missing step and asked for help to get to the next step in line.  I moved it as close to him as I could, but the stepping stones didn’t have much of a chain on either tether, so it didn’t move much.  He still had to stretch his body to make the step.  The other stepping stones were really easy for him and he quickly sailed across.  The next time he crossed, he didn’t ask for help.  I watched him stretch his body and take a little leap of faith at the end; trusting that he would reach the next stepping stone as he released his grip and footing from the platform.  I wasn’t totally sure he could do it myself, but I knew that he loves to leap across boulders on the escarpment edge near our house; I knew I could trust his judgement about his limits.  Sure enough, after a few more tries he had mastered this missing step in the stepping stone poles and he was off to explore something else.

Another family arrived to play and the mother, seeing the missing stepping stone pole, told her daughter “I’ll help you.  This pole is missing; don’t try to cross this section without my help.”  The daughter crossed with the mom’s help, but chose not to cross the stepping stone poles again.  I think I know why… 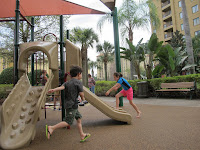 The girl’s mother had been talking to another parent but was now paying attention to the game.  As my son approached the stepping stones she yelled “Stop!” and rushed over to push the second stepping stone close to my son for him to cross.  Well, he did stop, as did all the other children.  My son obliged and politely crossed the missing stepping stone with the mother’s help but something else happened too…the kids all stopped playing their game of tag.  The element of danger, fun, and learning, had disappeared with this mother’s seemingly conscientious intervention.  Such a small well-intentioned gesture on her part, but such a huge impact on the flow of play and learning.  This mother had a need for safety for the children on the playground, but instead of addressing her need in a way that was respectful of the children’s abilities, boundaries, and flow of play, she put her need at the center of the play, unaware that they had already mastered this “danger”.

I’d like to relate this idea of needs to learning for a moment.  Some people wonder why I feel so strongly about self-directed learning.  Why wouldn’t I want to choose the things my child is learning or find fun ways to guide them in the direction I think they need to grow?  Because if I were to direct my son’s learning, I would be fulfilling my needs, not his.  I would be tricking or manipulating him to learn what I think he should, to match my vision of the world or to appease my fears.  The world we live in is intensely competitive, I understand why parents want to teach their children what they think will give them a “leg up”. 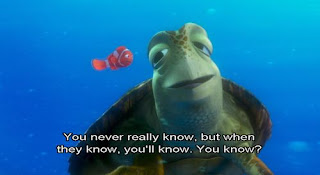 Children play because it is the most engaging and appealing way to learn.  When adults try to direct play or learning, the child is not pursuing learning for their own benefit.  They are trying to please the adults they love and that takes away from their own self-awareness and ability to “learn how to learn”.  I don’t want my son to learn out of shame, guilt, or fear…nor do I want him to play in ways that suit my vision of his abilities or disabilities.  I want him to; pursue the things that interest him, to recognize his limits and ask for help when there is a gap that feels too big to overcome himself, and to approach new challenges with delight and interest.  He cannot do that without a certain amount of trust and freedom on my part.  Without me being aware of my own fears and needs, I won’t be able to provide the trust he needs to find his limits and challenge himself in the ways that are most meaningful to him.  The world is changing at such a rate, that I truly believe this is the best way for me to prepare him for the future.  I really do my best to trust that he will learn what he needs to learn, when he is ready to learn it, to get himself where he wants to go.

I really believe the best gift we can give our children is our own self-awareness and the best learning and play environments are those filled with available, self-aware adults.  The next time you are at a playground, observe the adults. Are the adults coaching their child about how to interact because they don’t want their child to struggle with potential rejection or avoid their own embarrassment(at the expense of the child learning firsthand the nuances of playground socialization). Are they directing their child’s activities in an effort to “push” them to achieve a goal that they value? Or do they give space for the child to discover the world at their own pace?  Do they have the patience to watch and intervene when requested? I know which parent I’m striving to be!