Children’s Market: Learning about Economics and Marketing from an SDE perspective

We Learn Naturally sponsors the Children’s Market, an idea initiated and planned by Meaghan Jackson of Joyful Mudpuddles. It is so much fun for everyone, patrons, vendors, kids, and adults.  This time my kids were bursting with excitement to take part.

My son had lots of ideas.  Grandma, who isn’t used to Self-Directed Education suggested he sell popcorn and organized that for him.  While he agreed to do it, there were some other things he wanted to try.  He asked to sell lemonade and buy craft supplies for kids to make their own crafts (something that he absolutely loves to do.)  He had me scribe his list of supplies and we bought them the night before.  The morning of the market he woke early to get his things ready.  He asked me to make the lemonade and he asked me for help with some of the writing for his signs and price tags.  He does not like to write but he was motivated and inspired to do it.  At the last minute, he decided to bring some toys to sell and he spent nearly an hour sorting his toys and writing price tags for them.  He packed them in baskets and made sure his baskets were in the car, along with the “safe” he made out of a cardboard box where he had his personal money and some change from Grandma. 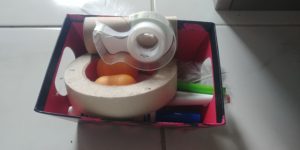 Once we were at the market, we got him a table and he got to work arranging his table the way he wanted it.  His table was a bit of a jumble as he is not the type of kid to pay much attention to displays (His sister is the opposite.  See the blog about her second Children’s Market coming soon.)

I truly did not see him or help him much during his time at the Market.  He spent his time at his booth but he also spent a lot of time patronizing other vendors.  He made observations about what they were selling and what things were popular and discussed this with his friends Tim and Matthew who had a booth beside him.  He was very much focused on pricing, reducing some prices and negotiating others and he often tried to give tips to his sister that she would get more customers if she lowered her nail salon prices. 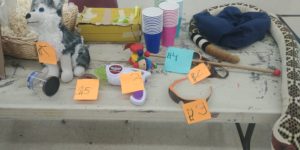 At the end of the market experience, my son had spent all of his money and sold all of the popcorn, most of his lemonade, and some of his toys.  He was thrilled.  Isn’t that what a market should be too?  An exchange of goods and services with people in your community where everyone walks away feeling satisfied.  As an adult, I was blown away at the kid conversations.  They were figuring out marketing and economics in ways that were immensely enjoyable for them.  In fact, that is my advice to other parents who have children who wish to take part; do your best to let them lead their Children’s Market experience.  The more you can step back and let them experiment with their planning, product, sales, and customer interactions, the more learning they will gain from the experience.  The more they can take ownership of the experience, the more likely they will want to take part next time because they are getting what *they* want to get out of the experience.  They are driving their own learning and their experiences will be vastly different from yours, their siblings, and other people at the market.  Creativity and innovation are born out of freedom to experiment.

A big thanks to Meaghan for organizing.  We’re looking forward to the next one!