Learning in our Community – City School 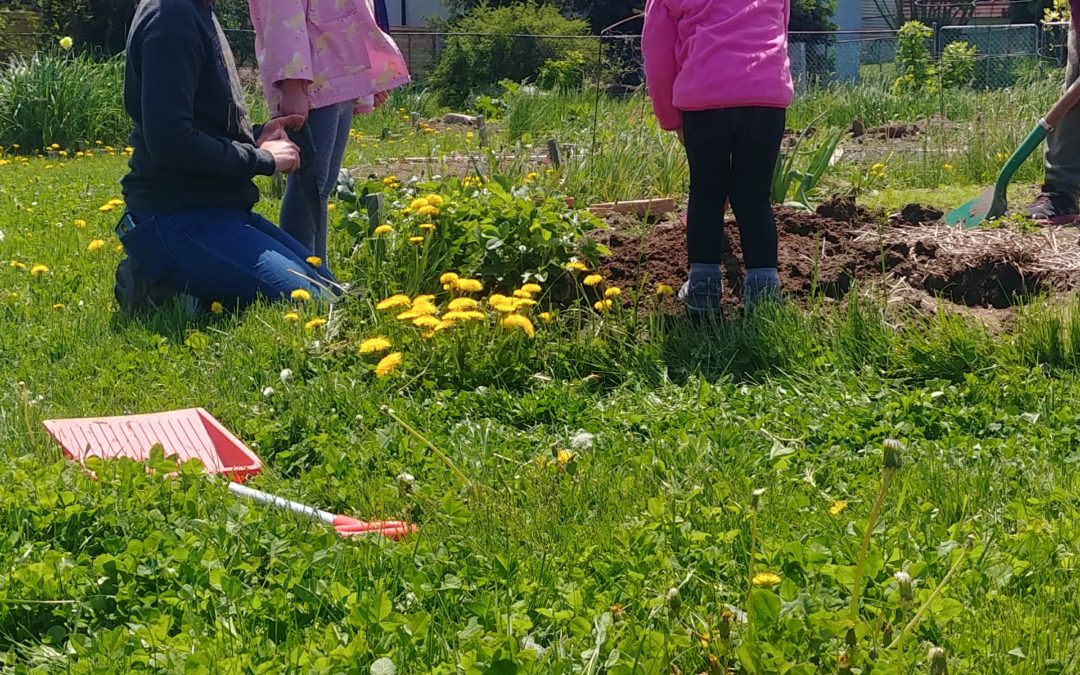 On Friday at City School we had an all-day field trip.  Being out in the community all day brought on so many new experiences!

The space that we rent at the church was booked this week and we created an adult plan that included getting some plants for our community garden space, planting them, and then getting a snack on the quaint and trendy Locke Street. Once we sent out an email and parents read the plan aloud to their children, the kids reminded us via their parents that they had been asking to go to McDonald’s.  Ever since our pizza trip (which you can read about here), D5 has been asking to go to McDonald’s and each time he brings it up, K5 supports his idea.  So at the last minute we changed our really lovely sounding adult plan to one that was more driven by the kids. 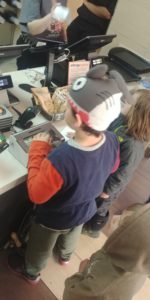 We gave the kids per diems so that they could make their own purchases that day.  The kids were excited.  At McDonald’s, M7 started to order on the touchscreen but at some point he realized he would need a lot of adult help to do that and wished to order with a real person.  The rest of the kids did the same. It was so neat to see all of the different learning taking place.  Some kids had never ordered for themselves before and placing their order was a big deal.  Overcoming feelings of apprehension to place their order was quite empowering.  Other kids experimented with the freedom of purchasing power.  J6 decided he wished to save his money for home.  M7 told the cashier “I would like a small coke.” And then he looked at me.  Unsure of what he was looking to get my input on, I asked him, “You would like a small coke?”  Then he smiled and said loudly “I mean a MEDIUM COKE!” Some of the kids practiced identifying coins, counting money, and counting change.  They received tickets with their order number on it and had to wait for their order number to be called.  Listening for those order numbers was a skill in patience and three digit numbers!  We don’t follow a curriculum, but if we did, the McDonald’s trip would have covered a few math strands.  A6, who is vegan, ordered a vegan happy meal and had to explain what was in it as the cashier had never heard of it before.  She needed to be clear and specific in her description of what a vegan happy meal was.  After all of the kids had completed their orders, which took a while, our cashier smiled and said, “I see their learning!  This is wonderful!  We’re all learning so much here; adults and kids!”  Her sentiments could have been the theme for the day!  It was not just about the kids learning but the adults seeing how much learning can happen just by being out in the community and empowering kids to learn according to their strengths. 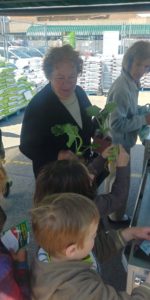 After McDonald’s, we walked to the garden center and the kids each picked out a plant for our garden plot.  It was so neat to see what each kid chose.  Strawberry plants were certainly the most popular but K5 chose a showy pink flower plant and spent the rest of her per diem money on a crystal butterfly ornament to go with it.  G8 picked out a golden grape plant because he likes gold (thanks to Minecraft) and grapes and wished to try this combination of two of his favorite things.  H5 decided to get sunflower seeds because he has tried to grow them at his house but the squirrels always eat the seeds before they sprout.  He wondered if he would have more luck in this new garden plot location.  I often think of H5 as being a thoughtful and logical thinker, so I appreciated his reasoning.  M7 chose watermelon seeds because he wanted to watch something grow from seed and he likes watermelon.  While we waited in line to pay for the plants, the kids chatted with the older ladies who were in front of us.  They discussed the plants they were all buying and, watching the interaction, I just felt so thankful that our kids get to chat with people in our community on a regular basis and learn from such a wide variety of life experiences. 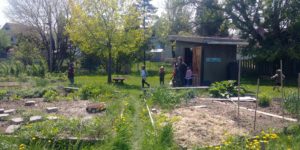 When we got to the Hill Street Community Garden, the kids were excited to be there.  Some kids just played and ran and exuded energy.  Others worked with Julie to read the Garden plot map to figure out where our garden plot was.  Once they found it, they got to work digging holes and planting.  We were doing our best to allow for experiments with garden plot and as adults, we found ourselves checking in with each other a lot.  “Can I say this?”  “I want to tell them how to do this but that is coming from my need…”  It was really tough to pull back and allow for this garden plot to be self-directed. 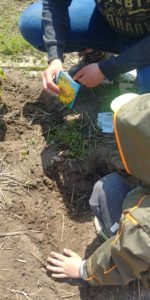 In the end, some plants were planted in ways that are in line with common planting practices and there were some that were not. M7 dug a very deep hole and poured all of his seeds in a pile and then covered the hole and ran off.  I wish those seeds luck in finding sunlight.  K5 helped C2 to plant her strawberry plant.  She pulled off the top part of the plant and stuck it in the ground.  When I remarked, “Oh, I see you pulled the plant off and left the roots in the pot.” K5 decided to try placing the roots on top of the strawberry plant.  Later she said she felt disappointed that she forgot to be careful about the soft roots.  We’ll see how that experiment goes.  H3 decided that she did not want to plant her plant, she wanted to take it home.  She is at City School a lot and Julie and I wondered if her choice to take it home will still feel like the best choice when all of the kids are regularly checking on their garden experiments and sharing their excitement.  I’m not sure.

After planting, the kids decided they were hungry again and had a picnic. This lull brought sweet moments such as G8 pulling out his paper and markers and drawing for 20 minutes.  This is a kid who normally avoids drawing but the specialness of the field trip inspired him to bring these supplies in his backpack and make 4 drawings.  C2, his younger sister noticed her brother drawing and after being busy with their own friendships for most of the day, she snuggled up beside him as he drew.  I love multi-age programs because siblings can connect throughout the day if they wish. Another lovely expression of sharing and friendship was expressed when A6 invited people to join her on her picnic blanket and also when D5 shared his snack with everyone.

After eating, the kids wanted to check out the park.  Perhaps the kids were tired or it could be that conflict is a part of life, but we had several conflicts to end our day.  All three facilitators were on duty using NVC skills to bring awareness to the needs within each child involved.  We didn’t necessarily find resolution to the conflicts that emerged but the end result isn’t really as important as the process. Sometimes solutions take time.  We don’t expect everyone to get along all the time and when kids start to articulate the things that bring them pain, the process of being with them in those moments is so beautiful.  As a facilitator, embracing the fullness of humanity is what makes this work so rewarding.

Overall it was a beautiful day of kid learning, adult learning, connection, and conflict.  The kids were able to experience their community and our community got to experience young, enthusiastic learners.  It felt whole and real and balanced. I’m looking forward to our next field trip day!